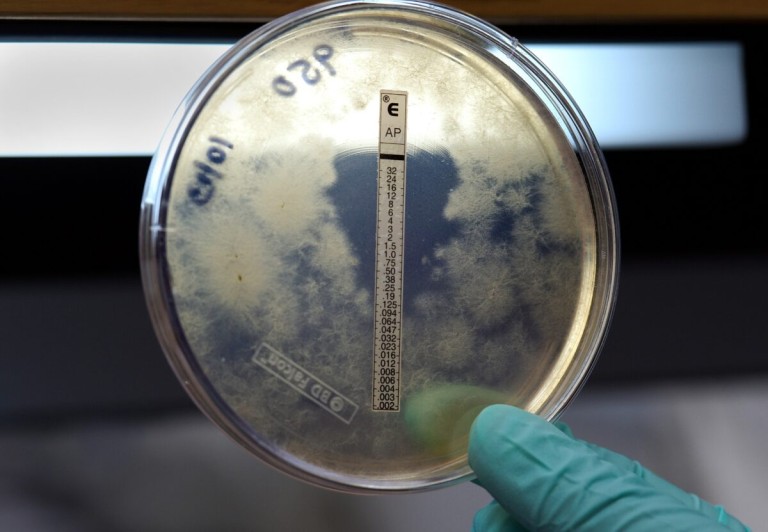 Meningitis is a condition in which the fluid in the cerebral spine (CSF), the thin membrane that covers the brain and spinal cord, swells. It is usually caused by a bacterial or viral infection that moves from the cerebral or spinal fluid (SFF) into the bloodstream. Bacterial meningitis is usually more severe and can lead to long-term complications and death. Pneumococcal meningitis can also cause pneumonia, which can trigger a life-threatening form of meningitis.

About 40 percent of people carry bacteria called Streptococcus pneumonia in their throat, back and nose. These bacteria are responsible for the most common form of meningitis, pneumococcal meningitis (pneumocystitis). From time to time, however, these bacteria manage to cross the blood-brain barrier and cause infections in the fluid that surrounds them. Bacterial meningitis is usually a combination of different germs that can cause a variety of symptoms, such as fever, headache, nausea, vomiting, diarrhea, muscle pain, dizziness and learning disabilities.

In newborns and children and infants can be infected with bacterial meningitis in the first weeks of life, as can their parents. Meningitis can be a serious infection, but it is not contagious, which is why outbreaks hit the headlines. Students living in student dormitories tend to spread infectious diseases more quickly, and serious complications can occur.

Meningitis is an infection of the fluid membrane called the meninges (pronounced “muh – NIN – jeez”). It is located in the fluids and membranes (or “meninges”) that surround the brain and spinal cord, and it is the result of a bacterial infection, not the infection itself. It can also occur in a person’s blood or when the infection spreads from another location in their body. Swelling in meningitis is typically caused by a bacterial infection, such as an infection of the meninges or a viral infection (e.g. E. coli or Pseudomonas aureus).

Meningitis can be the result of injury, cancer or certain medications, but bacterial, parasitic and fungal infections are other causes. Most cases of meningitis in the United States are caused by a viral infection. It is important to know which viruses and bacteria can cause meningitis, as the severity of the disease and treatment differ. meningitis is usually caused by viral or bacterial infections, but can also cause other illnesses such as headaches, dizziness, vomiting, diarrhea, abdominal pain, fever, muscle pain, exhaustion and nausea.

Sometimes meningitis can be the result of a bacterial infection, such as a fungal infection or a viral infection. Viral meningitis is generally less severe and usually resolves within days or weeks, while bacterial meningitis can be very serious and can lead to long-term health problems such as learning disabilities, kidney failure or even death. Some of the most common symptoms are headache, dizziness, nausea, vomiting, diarrhea, abdominal pain, fever, muscle pain and exhaustion.

Bacterial meningitis sometimes causes a type of blood poisoning called septicaemia, which occurs when the bacteria and their toxins enter the bloodstream and the rest of the body via the blood vessels in the brain, kidneys or other organs. Although the viral form of the disease is generally far less severe, symptoms can be similar to both viral and bacterial meningitis. Cryptotic meningitis is a disease that affects people with immune deficiencies such as AIDS. It is often very difficult to detect meningitis because the symptoms can resemble the flu at first.

Symptoms can be very sudden and the person concerned can become very ill within a few hours. It can be treated with antibiotics, although other treatments may be necessary to assist the person through the disease. Meningitis can occasionally lead to death, but early detection and treatment offer the best chance of a good cure. The cause of meningitis is usually a bacterial or viral infection that starts in the body, brain, ears, sinuses or throat. However, there are other causes, such as cryptococci – fungal infections and cancer – that are linked. Both types of viral and bacterial meningitis are contagious and can be transmitted through coughing, sneezing and close contact.