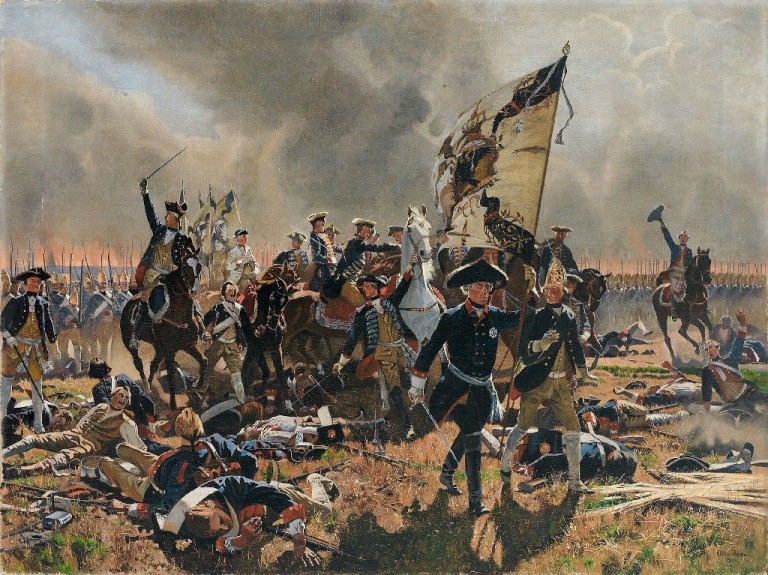 The Battle of Zorndorf, which took place on August 25, 1758, during the Seven Years War, was fought between Russian troops under command of Count Wilhelm Fermor and a Prussian army under the control of King Frederick the Great, the battle was unsuccessful with both armies holding up and winning victory. East of the Oder in Brandenburg-Neumark, the Prussian army with 36,000 men fought against the Russian army with 42,590 men on 25 July 1758 in Zorneding. The location of the Battle of Zorndorf, Prussian village Zorndorf, Sarbinowo, Poland. Zorundorf was Frederick’s first personal experience with the Russian army, and they fought him in a much bloodier and protracted original battle.

Meanwhile, Frederick’s infantry fell back to the left-wing of the Russian army. The famous cavalry Friedrich Wilhelm von Seydlitz collaborated on the way to the escape lines with the Prussians and the Russian infantrymen mistook them for the Russians by clouds of dust and cannon smoke and opened artillery fire. Although Frederick intended to repeat the crooked orders of attack that brought him victory in the Battle of Leuthen, the Russian line could not retreat and was swamped by the left arm of the army in its back, and because the Russians were incapable of locking themselves against the successful Russian resistance in unfavorable terrain, the battle took on the course of a bloody frontal clash between the opposing armies on a narrow battlefield.

The troops of the Prussian Leftwing under Major General Rautter were shaken but withstood the resistance until they were crushed by Russian artillery fire and were near Fuchsberg when Russian cavalry appeared on its flank. The cavalry of the left-wing withdrew to Zorndorf, took cover from the bombardment of the Russian artillery, reorganized its ranks, and paused.

The deserters of the Prussian army informed Fermor that the king intended to attack in the direction of Batzlow and Wilkersdorf. The Prussian armies moved westward and marched along the line between Zorndorf and Wilkerdorf, swinging northward to begin the attack on the Russian hinterland, but once in the hinterland, Frederick did not turn his army around to accommodate it. When he left, he was eager to announce that it was a retreat, but in reality, the Russian army had not fled and was marching in a perfect fashion not to disturb the remaining Prussian troops.

The king seemed to expect a Prussian attack from the north, and to make the error worse, Fermor sent a force to ensure that Mutzel was unrestrained. His scouts informed him that Frederick’s army had captured the New Dam Bridge and had dismantled the last barrier between them and the Russians.

Millar noted that Friedrich was not at his best in Zorndorf, noting that he had sent his small army into battle without proper reconnaissance and had failed to exploit a disorganized Russian force. Frederick had regarded the Russian army before the battle as weaker than his own, but the Russians proved to be tough adversaries in the battle, and Frederick was frustrated by their persistence. Fermor knew that Frederick would look to Morrow to put the Russians in a new position to compensate for any changes in the situation.

The indefatigable Prince Moritz of Anhalt-Dessau demonstrated the marshal reserves of the cavalry on the Russian right-wing and then went to the Prussian right-wing, where he took up position in front of the infantry center and waited for Frederick’s arrival. The situation was different on the left arm of the Prussians where the Prussian infantry heard the roar of battle and saw the servants of the right battery, followed by the Russian hussars. On the right, Dohna’s infantry moved to ease the pressure on Kanitz, who was attacked on the left-wing by General Demikus.

Frederick’s cavalry crossed the steep Zabern Ground, formed a line, galloped forward and launched an attack that swept away large parts of the Russian infantry. The Russian army of that time was not the steamroller of later years, but a limited and durable force that sent fewer than 70,000 soldiers to fight in the West. On the other hand, it was blessed with hard and stable troops who took an enormous amount of punishment along the way.

This article uses the figures of Prussian King Frederick II (reigned 1740-1786) to combine theoretical and practical military knowledge from the King’s military treatises with practical examples of the Prussian Army’s campaigns against the Russians in the summer of 1758 at the height of the Seven-Year War (1756-1763) which culminated in the Battle of Zorndorf. The campaign narrative is supported by six 2-D maps of eastern Europe in 1758: Russian and Prussian movements in August 1758, the siege of Custrin, Frederick’s march to Zorandorf, the starting position at Zorindorf, and the last Prussian attack, as well as three 3-D bird-eye views of tactical maps of the battle. During the Seven Years War, many battles were fought between generals and soldiers.

Zorndorf (1758-125) in the series Osprey Campaign by the British army officer Simon Millars is the best volume about Frederick the Great’s campaign to date, and his narrative style has been greatly improved. On 15 August 1758, the Russian general William Fermor attacked Custrin, Frederick’s parents’ home in Great Prussia, and sent the Prussians on their way to Custrin to face the Russian army.