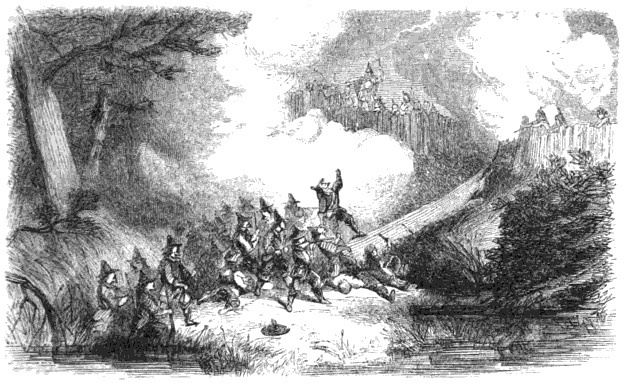 As trade partnerships collapsed and English settlers invaded Native American territory, the Wampanoag, Nipmuc, Pocumtuck, and Narragansett tribes spearheaded the last major efforts of the Native Americans in southern New England to expel the settlers. Tensions rose, and the natives of eastern New England began to attack the colonies as enemies of the natives.

Colonial leaders who saw the Narragansetts as a violation of a series of peace agreements led the United Colonies of Massachusetts Bay, Plymouth, and Connecticut to assemble the largest colonial army in New England to date, consisting of 1,000 militias and 150 Indian allies. On August 12, 1676, Benjamin Church, an English colonizer and military leader who led a company of British and Indian allies, attacked a group of Wampanoags with the intention of killing the Wampanoag-Sachem known as Metacomet (Metacom, King Philip). By September the colonists and their Indian allies in southern England had destroyed much of the Indian opposition and killed thousands of Indians, many of whom were sold into slavery and forced labor.

King Philip’s war (1675-1678), also known as the Metacom War, was a conflict in New England between a coalition of Indian tribes under the command of Metacoms (also known as King Philip (l. 1638-1676), the head of the Wampanoag Confederation, and English immigrants who colonized Indian land. Colonial weapons buried with Indians in 17th-century Wampanoag graves indicate a value attributed to them, supported by historical accounts of Indians who used them during the war. King Philip was the son of Massasoit (L.C. (1581-1661 or 1621) who had given much-needed help to the English colonists who had founded the Plymouth Colony.

Massasoit (l. ca. 1581-1661) (1621) had provided the necessary support to the English colonists who founded the Plymouth colony, and the first governor, John Carver (l. 1584-1621) signed a peace treaty between Pilgrims and Wampanoag in March 1621 promising mutual assistance to defend the colony and promising that the treaty would be respected by both sides after Massasoit’s death. The colonists demanded a peace agreement, which meant that the Wampanoags would give up arms and hang three of their fellow Christians, John Sassamon, who had been murdered in 1675, who had told the colonists of Plymouth of plans to attack English settlements. Metacom continued to negotiate with the English to keep tribal lands, but when further agreements and promises were broken he launched a major offensive to push the English back into the so-called King Philips war.

A jury of colonists and Indians found the three Wampanoag men guilty of the murder of Sassamons and hanged them on 8 June 1675. The hanging angered Philip and the English, who accused the conspiracy against Sassamon of being behind the murder, and inflamed tensions between the Wampanoags and the colonists, who were preparing the ground for war. Between 20 and 23 June, the Wampanoags carried out a series of raids on the Swansea colony in Massachusetts, killing, looting, and destroying many colonists. With the united tribe came the largest army that the colonial masters could muster, fighting in coalition with other tribes.

British officials responded by sending their troops to destroy Philip, whom they accused of plotting the murder of Sassamons in his hometown of Mount Hope, Rhode Island. The time in Massachusetts between the landing of the pilgrims (1620-1661) and the death of Massasoit, the head of the Wampanoag Confederation, was marked by peaceful coexistence between colonists and local tribes. As the war spread in the summer of 1675, the Wampanoags were joined by Algonquin warriors who attacked settlements in the Plymouth Colony.

King Philip’s War was the last attempt of the Native Americans to avoid recognition of English authority and to stop the English colonization of their homelands. It is named after Wampanoag Chief Metacom, also known as Philip or King Philip, who fought the war. At the center of the bloodiest war in American history was a man, Metacoms leader of the Pokanoket Tribe of the Wampanoag Indian Federation.

The King Philips War (also known as the Metacom War or the First Indian War) was an armed conflict in New England between English colonists and American Indians in the 17th century. It was also named the Great Narragansett War (1675-76) in British-American colonial history, a war in which Indians fought against English settlers and their Indian allies in one of the bloodiest per capita conflicts in US history. Since the early 18th century historians based on reports from Massachusetts Bay and Plymouth colonies have called the conflict the King-Philips War.

The King-Philips War also called the First Indian War, Metacomet War, Metacomet War (Metacomet War, Pometacomet Rebellion or Metacom Rebellion), was an armed conflict between New England natives and the New England colonists and their indigenous allies (1675-1678). It took place in Rhode Island, Connecticut and Massachusetts between 1675 and 1676 and spread to Maine and New Hampshire. It was the last great attempt of the Indians to expel the English colonists from New England.

Over the span of six months, local raids assaulted farms and villages in Massachusetts, Rhode Island, Connecticut, and Maine and struck the colonial militias back. King Philip’s War is the name of Metacom, a Wampanoag chief who took the name Philip because of friendly relations with his father Massasoit, a Mayflower pilgrim. William Hubbard’s A History of the Indian Wars in New England: The First Settlement and Ending of the King Philip War; The Leaders of the Indian War of 1677; Benjamin Thompson’s The New England Crisis, the first epic poem by the Rev. In North America.