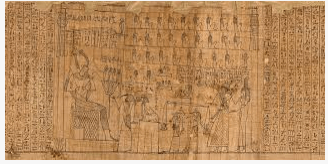 European researchers and archaeologists named the sites found in the tombs “Book of the Dead.” The true ancient Egyptian name translates as “Book of those who come forth after the Day.” The ancient Egyptians believed in magic and this book was actually a collection of magical speeches and prayers to be used by the dying person. The book of the dead was developed to help and guide those who could pass a spiritual test and enter the hereafter. The text served as a guide for the dead on their way to the hereafter, which they used as a guide. The scribes prepared the burial with different qualities depending on their abilities, but all the blanks were prepared to fill in the names of the dead later. The recording included spellings and passages of text, the name of each person and their burial place.

The Book of the Dead first appeared in the New Kingdom and is the oldest and most famous of all ancient Egyptian death texts. This text evolved from a long tradition of magical and buried writings and has been used as a guide to the afterlife and as the basis for many of our modern rituals. Egyptian belief that a dead person may take the text with him to the afterlife. It should be noted that the term “Book of the Dead” is an extremely loose translation, and it is not the only one in the book.

Egyptologists used the term “Book of the Dead” when they published the translation in 1840, but it is believed that the Aspell in the Book of the Dead are only useful in the afterlife. The translation is based on papyrus found in Egyptian tombs, many of which contain a version of this “Aspell.”

The Book of the Dead, known to ancient Egyptians as prt hrw (“to come forth from the day”), comes from the papyrus Ani, written around 1240 BC. This version of this book is full of stories of Anis and his wife traveling through the land of the dead in the Halls of Ma’ati. The papyrus also states that if one is able to survive the afterlife, one can use it as a guide for the afterlife.

The Book of the Dead was known to the Egyptians as the book that “was to go forth from the Day.” This collection was not a book, but became known as “the book” because it was actually a huge collection of spells. For example, some of the spells were written on the walls of tombs or on amulets or painted or written on papyrus rolls placed in the tomb. There is a copy that contains all these spells and almost always an example of a negative confession.

Originally written in hieratic script (hieroglyphics), the Book of the Dead is actually a collection of magical spells that were intended to help the dead to safely enter the underworld and eventually escape from the hereafter. Many copies of these spells contain beautiful vignettes showing the deceased on their way through the Duat (underworld).

In fact, the tradition of using tomb texts began as early as the Old Kingdom, but the entire collection was actually developed over thousands of years. The first text ever buried in Egypt was the Pyramid Texts, which are on display in the Museum of Antiquities in Cairo, Egypt and in many other parts of the world. These books (preferably called collections of texts) were used as a kind of ritual protection for the dead and their families and friends. More than 50 wooden sarcophagi from the late Bronze Age (about 2000 years ago) were found in the tomb shafts, former Egyptian minister of tourism Hawass says.

Archaeologists also discovered tomb wells, coffins and mummies from the Sixth Dynasty, which ruled Egypt from 2323. BCE up to 2150 BCE Hawass told reporters in the Sakqqara necropolis. Archaeologists have also found a number of ancient manuscripts, including the Book of the Dead, which was part of a series of books aimed at taking the dead into the underworld of ancient Egypt, he says. Archaeologists have uncovered the remains of more than a dozen tombs from the New Kingdom (ruled Egypt between about 1570 BCE and 1069 BCE) and the Fifth Dynasty (from about 1470-1490 BCE). The archaeology has also excavated a well, a coffin and a mummy, which date to the Second Dynasty of Egypt (about 1250 – 1240 BC), as well as the tomb of King Khufu, ruler of Egypt during the Sixth Dynasty (between 1340 – 1350 AD), and another tomb from a tomb in the Sixth Dynasty of Egypt, from 1330 BC – 1140 AD, according to Hawass.